Home » 6 Reasons Why Your PCs Crash You Must Know 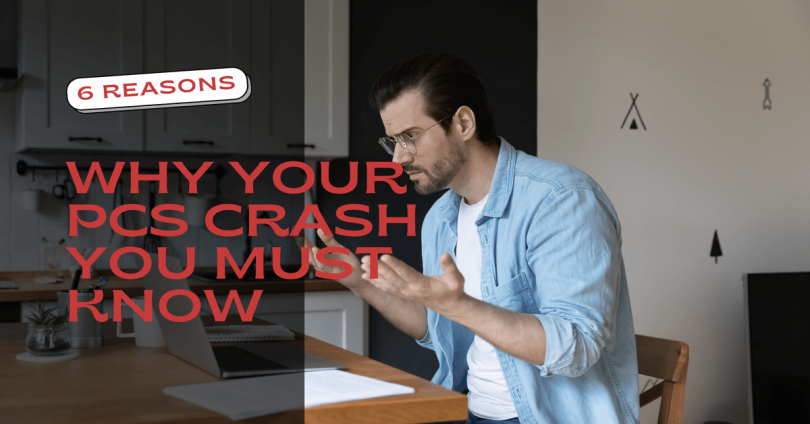 How often do you think about why your computer might crash?

Many people don’t consider it at all. They just assume that their computer is faulty or weak. And if they’re lucky, the problem will fix itself on its own after a few attempts of restarting or some other troubleshooting. These methods are not really effective and if you want to know the real reasons for your crashes then keep reading.

A hardware conflict is a glitch between the hardware of your computer and it may occur when you’re trying to install more than one large program or device onto your computer. When this occurs, the more critical parts of your system will crash essentially shutting down your PC. To fix this problem, you can either uninstall some programs that you don’t need on your computer or update them to newer versions. You can also try plugging in fewer devices into your USB ports, like if you have too many then try unplugging some of them.

The first and perhaps the most important thing you should know is that PCs crash because of low memory. Memory, or RAM as it is otherwise known, is where the system temporarily stores data so that your computer may retrieve it later – which enables it to perform many other tasks. If this cache becomes too small, then errors will occur and the machine will crash.

This is why many people recommend having at least 4GB of RAM in your computer. More or less, the amount you should have depends on what you plan to do with it – if you are playing games that require a lot of space, then you need more memory in order to run them well. The good news here is that you can increase your PC’s RAM by installing Ram cards.

A system driver is a software that tells your hardware how it should behave. Each time you add a new piece of hardware to the computer, then you need to install its corresponding driver in order for it to work properly when connected. If this process fails, then errors will occur and the machine may crash. It’s also possible that an outdated driver may lead to system freezes and crashes.

The solution here is to always keep your drivers updated. Download the latest version of each driver – this will ensure compatibility with the current hardware installed on your computer as well as eliminate some errors from happening.

This is one of the most important things you must know when it comes to why PCs crash. Viruses are essentially small programs that are designed to “infect” the host computer – in layman’s terms, this means that they take control of your system and perform actions that could be dangerous for your computer.

Malware, on the other hand, is just like viruses except that they don’t require human interaction to “spread” themselves. The only difference is that they don’t have the objective of harming your computer – rather, it could be something as simple as showing you annoying popup ads or redirecting you to websites.

Malware usually goes undetected until it has already done some damage to your system. Unfortunately, this is the case with many hacked users – it’s only when they try to check their computer for viruses that they find out that it has been compromised.

The solution here is to always keep your antivirus activated and updated at all times. Do this by checking regularly if there are new virus definitions available and applying them to your system.

A PC that overheats is equivalent to having a laptop with a low battery – there’s just no way for it to function properly. This usually happens because of faulty fans, which are responsible for drawing out the hot air from inside the machine and cool things down. If this fails to happen, then the machine will be unable to run for a very long time until it eventually crashes.

This is a common issue for many users – one that can be easily prevented if you keep an eye on all the programs that are running in the background. The best way to monitor this is to hit CTRL+ALT+DELETE and then click Task Manager. You will then see a whole list of programs being run by your computer, with their corresponding memory usage in brackets. You should not have too many programs running at the same time – if you do, then this will take a huge toll on your computer’s performance and cause it to crash often.

The solution here is to always exit your software when you are done with it – this will allow the machine’s memory to clean itself up and reduce all background activity. This is also the best way to ensure that crashes don’t happen in between sessions.